On June 26th, City Council will be voting on proposed changes to Aberdeen Avenue from Queen Street South to Longwood Road South. These modest changes, if passed, will help protect some of our most vulnerable citizens and create safer streets for everyone.

On June 26th, City Council will be voting on proposed changes to Aberdeen Avenue from Queen Street South to Longwood Road South. These modest changes, if passed, will help protect some of our most vulnerable citizens and create safer streets for everyone. The changes are as follows:

This year, City Council unanimously approved three bold policy pillars that should shape every aspect of the work of our municipality now and into the future.

I.    Accelerating and Prioritizing Climate Action in Response to the Climate Emergency;
II.   An Equity, Diversity, and Inclusion (EDI) Lens Framework; and,
III. The Vision Zero Action Plan

These three policies directly influence the proposed changes to Aberdeen Ave. Hamilton City Council's decision on Wednesday will demonstrate if we will uphold our commitment and be willing to chart a more resilient, safer, and more equitable and prosperous future for our city.

There are 665 children between the ages of 5 and 19 who must cross Aberdeen Ave to reach the five nearby schools, a minimum of ten times a week. This minor arterial road carries a traffic volume of approximately 20,000 vehicles a day. At the peak times of 8:00-9:00 AM and 4:30-5:30 PM, 1820 and 1765 cars pass through respectively. This peak time coincides during the same time of day our children are on their way to school or returning from school, play, or practice.

Vision Zero has a clear and straightforward goal of no deaths or severe injuries on roadways. To achieve that we need to improve the safety of our roads. By adding parking on roadways, it will reduce the speed of motorists and increase compliance with speed limits. As well, the row of parked vehicles acts as a buffer between moving traffic and pedestrians, increasing feelings of safety. These same changes were made along Kenilworth Avenue in the east end of Hamilton. City staff report that the parking along both sides resulted in an 8 to 12 km/hr reduction in average speed.

Creating livable and walkable communities is a crucial component in responding to the Climate Emergency. When people feel safe walking or allowing their children to walk in their communities, they are more likely to choose sustainable transit options compared to driving. The private vehicle is the most significant contributor to carbon emissions in Hamilton. This will also have positive health impacts. Two in three adults in Hamilton are overweight or obese. Being able to incorporate physical activity into daily routines, such as transportation, will help improve residents' health by relieving stress, boosting mood, and improving memory and sleep.

When applying an Equity, Diversity, and Inclusion Lens, we must consider the impact of decisions on those of ages and abilities that are the most vulnerable. Some individuals do not have the option of driving. At the Hamilton Municipal Senior Awards, we discussed the importance of seniors being able to get out of their homes and into the neighbourhood to combat social isolation and sedentary lifestyles. The city’s vision includes the goal of ageing successfully.

The upcoming conversion of Queen Street South from one-way to two-way, between Aberdeen and King, will offer commuters another alternate route to downtown and highway 403, east and west while lessening the volume of cars on Aberdeen.

Aberdeen is not the only route for those travelling between the escarpment and the lower city. Google Maps frequently directs motorists to highway 403, which takes approximately the same amount of time as taking Aberdeen Ave, even when during morning peak traffic. This includes commuters travelling from Ancaster to downtown Hamilton; Ward 8 and Ward 14 to McMaster; Burlington, Oakville, and Waterdown to Mohawk College. (See map examples below)

Some have argued that two lanes of traffic can not accommodate the traffic volume Aberdeen Ave receives. However, Mohawk Rd/Rousseaux St is a two-lane road in Ancaster that accommodates higher car volumes and is considered a major arterial road. Approximately 24,000 motorists a day exit from Highway 403 and the Linc on to this Ancaster road - 4,000 more than Aberdeen Ave. 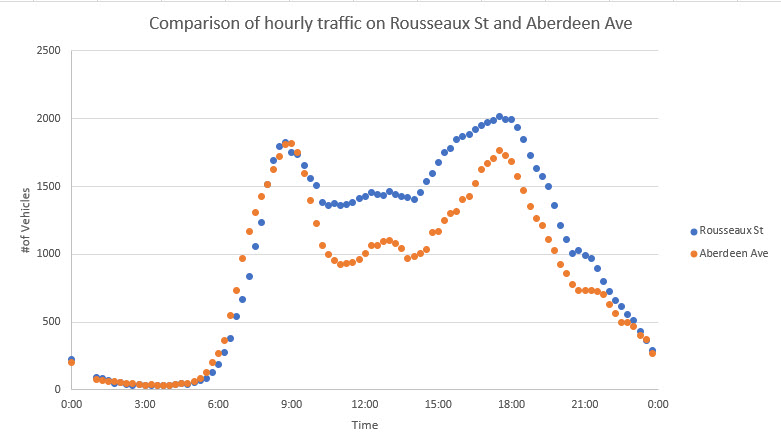 The population of Ancaster continues to grow. In 2016, the population was over 42,000 (a 15% increase since 2011 & 25% since 2006). Arguably, this increase added traffic stress on Mohawk Rd/Rousseaux Street and Wilson Street East, both major arterial roads with two lanes for vehicles.

City staff are recommending a vision zero approach for changes to Mohawk Rd/Rousseaux St in Ancaster. Instead of adding a third lane for pass-through traffic, staff are recommending a centre two-way left turn lane and a multi-use trail with a boulevard for cyclists and pedestrians between the trail and the road. This also came in response to Ancaster residents rightfully expressing their concerns over pedestrian and road safety. 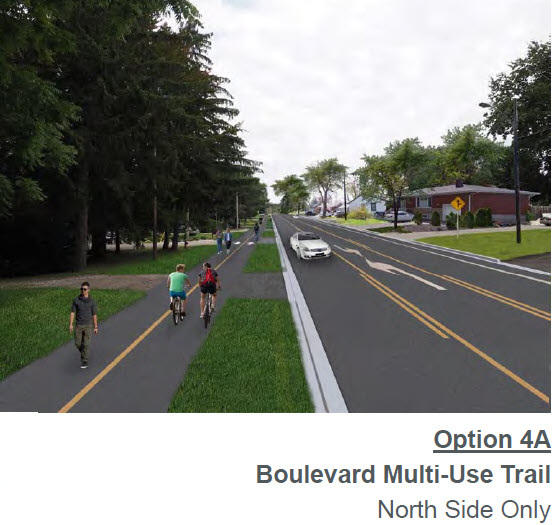 I have had the good fortune of visiting almost every single neighbourhood across our great city, largely because my children’s team sports have taken me to countless school gyms and rec centres. From Millgrove to Waterdown, Davis Creek to Riverdale, Dundas to Rolston, I have seen lawn signs asking motorists to slow down and be mindful of children. And, at almost every single planning meeting when a new development is being proposed, the neighbourhood usually expresses concern over how the new housing might compromise the safety of children and residents due to an increase in car traffic. In short, regardless of where you live in Hamilton, residents want our streets to be safer for all residents, especially our children and seniors.

The staff’s recommendations for Aberdeen Ave recognizes the risk the street presents to children in its present form. The proposed changes will make the street safer for all concerned and will move us closer to realizing our city’s vision to be the best place to raise a child and to age successfully.

Aberdeen as a connector to Mohawk College, McMaster Hospital/University, & Downtown

Time for westbound traffic from Hwy 403 & 6 (e.g. motorists coming from Burlington or Oakville)

Google recommend route:
Mohawk to 403 to Aberdeen to Longwood to Main (18-35 minutes)

Google alternative recommend routes:
Garth to Mohawk to Rosseau to Wilson to Main (18-40 minutes)
Garner to 403 Aberdeen to Longwood to Main (24-25 minutes)