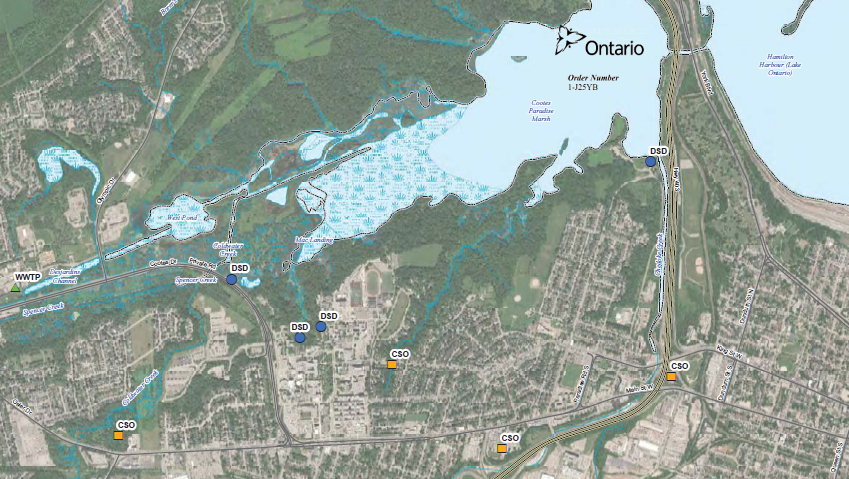 On April 29 Hamilton City Council received a city staff and consultant report detailing the impact of the sewage spill on Cootes Paradise. The consultant's report concluded that the spill did not cause a long-term impact on water quality in Cootes Paradise.

I voted against receiving the report due to its lack of consultation with our agency partners, especially the Royal Botanical Gardens (RBG). Secondly, the City of Hamilton was given a very short period in which to respond to the Provincial Order. As a result, no new information about the spill itself could be collected, and the availability of data for essential ecosystem components was limited. The City could have announced that it was planning to do more to investigate and remediate the spill in future.

A sewage discharge of 24 billion litres entered the lower section of Chedoke Creek which outlets into the south shore of Cootes Paradise. This spill from the Main/King Combined Sewage Overflow (CSO) tank occurred between January 28, 2014, and July 18, 2018. The spill is explained in this video.

On November 28, 2019, the Provincial Ministry of Environment, Conservation and Parks (MECP) issued a Director's Order to the City of Hamilton, instructing the City to assess the potential impacts of the spill to Cootes Paradise. The City was required to submit an environmental impact evaluation to MECP by May 1, 2020.

Cootes Paradise Marsh is part of the Cootes Paradise Nature Reserve owned and managed by the Royal Botanical Gardens (RBG). Provincial orders do not oblige the municipality to consult with any stakeholder, even City Council. That is why there was no recommendation in the staff report because there was no action for Council to deliberate. The process belongs to the Province; however, the city staff report spoke of the need to work in partnership with other community agencies, including the RBG, on watershed management. Given their intimate knowledge of Cootes Paradise, I think a review of the methodology and findings by these agencies would have served the public interest.

How the Environmental Impact Evaluation (EIE) was conducted

The consultant looked at four ecosystem components - water quality, sediment quality, aquatic vegetation and the fish community. The spill's impact on the components was determined by studying the condition each before, during and after the spill.

Firstly, the tight time frame to submit the report to the MECP meant that the consultant was not able to collect additional samples in Cootes Paradise between November 2019 and May 1, 2020. The assessment relied on historical information made available by the Hamilton Conservation Authority (HCA) and the Royal Botanical Gardens (RBG).

The data set which focused on water quality was the "most complete", and therefore, the consultant reported that their conclusions were very firm.

In terms of sediment quality, there was very little data. The consultant's comparisons were limited to the area at the mouth of the Chedoke Creek as opposed to the Cootes Marsh.

The consultant reported that while there was a lengthy record of recorded aquatic vegetation data (1996-present) from multiple locations (20-25), the data was not collected at the same site each year.

The consultant stated that while there were not as many gaps in the fish community data compared to that of aquatic vegetation, gaps did exist.

Long term data from the location of the Fishway and Cootes Paradise was available.

The consultant grouped fish into one of two categories – those sensitive to water quality and the other by their feeding and position in the food web. The consultant reported that there were changes in the sensitivity of species to water quality, but the changes didn't seem to be associated with the spill period. There were both increases and decreases in abundance of all fish species within the spill period. The consultant concluded that the stress of the fish community came as a result of regional effects rather than specific impacts associated with the spill.

What are "Regional" Influences?

Between 1989 and 2010 the Regional Municipality of Hamilton-Wentworth (before amalgamation in 2001) and then the City of Hamilton invested millions of dollars in the construction of nine CSO tanks.

Ward 1 has four tanks: Ewen, Sterling, Royal, and Main/King. These tanks have greatly improved the quality of water in both Cootes and Hamilton Harbour. Before their construction, when the amount of water and waste exceeded the capacity of the system stormwater and sewage would overflow into our natural environment Now, the CSO tanks hold much of this overflow until the wastewater treatment plant has the capacity to manage the material.

We need to continue to focus on capacity and overflow. But, we also need to turn our attention to influences upstream from Cootes. That means looking at our land development patterns (sprawl), the ability of all properties to absorb stormwater and the amount of impervious material we are using in housing and business developments. It also means looking at the industrial and agricultural runoff. In other words, we need to look at the entire watershed.

There are broader and consequential impacts occurring outside Cootes Paradise that are hurting the health of its ecosystem. Urban runoff entering these Creeks contributes 20% of the total annual phosphorus loading into Cootes Paradise while overflow from our CSO tanks contributes 14%. The most significant loading of phosphorus into Cootes Paradise comes from Spencer Creek, not Chedoke Creek. In other words, the well being of Cootes, and, by extension Hamilton Harbour, is impacted by every area of the City.

We need a truth and reconciliation of sorts. If we genuinely care about our natural environment and Cootes specifically, we must publicly recognize what we have done to our urban waterways. We have failed to consider the impact on the integrity of our creeks and natural environment as we sliced and diced our waterways over many decades.

Hiding creeks underground has enabled this ignorance. Consider this description of Chedoke Creek from the consultant's report:

"Much of its length has been straightened and channelized, and a significant length of stream is conveyed underground between Main Street, King Street West and Highway 403. Downstream of Highway 403 and the Main Street interchange, Chedoke Creek has been straightened and is characterized as a large drainage canal to Cootes Paradise. Chedoke Creek has been assessed as marginal fish habitat due to the highly altered nature of the watercourse." (page 5 of the consultant's report)

The City is going ahead with a water monitoring program downstream of the City's water and wastewater infrastructure with plans to sample and monitor water quality beyond the downstream area. This program is good news. Sampling upstream and downstream is imperative.

I have met with numerous stakeholders including the RBG, Bay Area Restoration Council (BARC), Hamilton Conservation Authority (HCA), Redeemer University, Green Venture, Hamilton Harbour Remedial Action Plan, and Hamilton Water. We discussed the opportunities to move to a new governance and monitoring model that has the watershed as its focus.

I believe we, Council, staff, stakeholders, and residents have a vital role to play in the health of waterways. The Corporation of the City of Hamilton has the duty to investigate further and remediate the spill, and Citizens have the duty to demand that the City act on its responsibility. We can learn from this mistake. We can be better stewards of and partners to the environment. As a resident, and as an elected person, this is my commitment to you.