Why electric buses are no substitute for Light Rail Transit 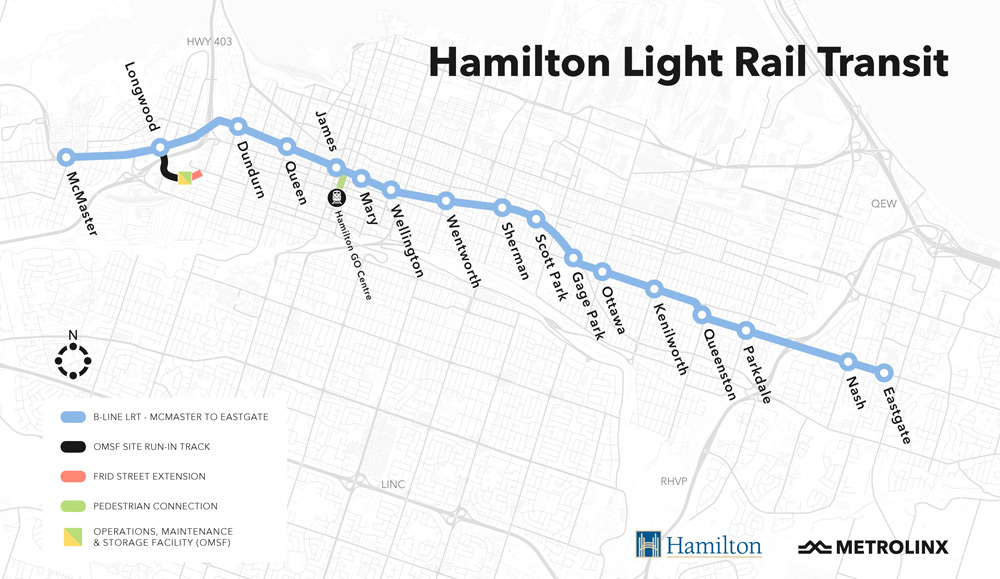 As part of Hamilton City Council’s deliberation of the city’s 2020 operating budget, Council spent “Transit Day” discussing Hamilton’s HSR operations.  At the same time, the Government of Ontario announced who would be sitting on the panel tasked with determining the future of LRT in Hamilton.

These two events are of enormous importance to Hamilton’s future budgets, public transit system and levels of property tax that will be paid by existing and future Hamiltonians.

A just-released HSR-produced video (http://bit.ly/HSR-Frequency) showing bus frequencies tells the story of a transit system near capacity. The B-line, for example, running from University Plaza in the west to Eastgate Mall in the east, is the busiest transit route in Hamilton, with nine million trips per year—more than 40% of Hamilton’s total public transit ridership. With Hamilton’s population set to grow by 30% over the next 30 years that corridor will continue to fill up.

It’s for this reason that the B-Line was chosen for LRT.  The ridership is there.

This very situation speaks to the limitation of buses, even electric ones because buses are still single vehicles. They too compete with cars and trucks for space within shared travel lanes.  This impacts their efficiency and it also adds to the congestion of the entire roadway.

LRT runs on rails in a dedicated lane. As ridership grows, additional rail cars are coupled to the first train without the expense of more operators or competition for additional lane space.

Currently, 60% of Hamilton’s transit fleet operates for longer than the capacity of electric vehicles powered with overnight battery-charging. Also, as Mark Selkirk, Hamilton’s Manager of Fleet Maintenance, notes, “mountain-climbing routes are a big drain on batteries. You lose 60 percent of efficiency on the Escarpment.”

The city estimates it would need to purchase twice as many electric buses to serve Hamilton’s existing transit demand and electric buses with batteries are 1.5 times the price of other propulsion vehicles.  Buses with smaller batteries could be purchased; however, it means routes would have to be fitted with multiple charging stations, requiring a new charging infrastructure across the city.

What about the greenhouse gases generated by constructing LRT?  The research on this is clear.  Different types of rail construction emit different levels of GHG when constructed. Of all types of rail, LRT has the lowest embodied GHG emissions.

Nothing spurs development and impacts urban form like the permanency of rails. Again, the research is clear on this.  Sustainable city building is about avoiding unnecessary travel trips, reducing trip lengths and shifting to how trips are made. Compact, mixed use pedestrian friendly development averages 30% to 40% less C02 with shorter distances vehicles needed to travel the routes.

We can’t meet our emission targets if all we do is swap our internal-combustion HSR buses for electric buses. Buses, even when electric, keep our urban form in place. Additionally, we will emit enormous amounts of C02 making and maintaining the needed infrastructure improvements for electric buses and maintaining or even expanding the roads to service these buses and low-density sprawl.

Let’s assume you are a climate sceptic or will never use light rail transit.  Why should you care about LRT?  Because we can’t afford more of the same.  Because our infrastructure deficit exceeds $3 billion and is growing by $250 million each year due in large measure to our history of suburban expansion.  Because homeowners and renters across Hamilton are having to shoulder a greater and greater tax burden each year to fill the gap left by a restructured steel and manufacturing sector, provincial downloading and sprawl.

All public investments generate forever operating and maintenance costs.  Some investments, however, can generate a return for taxpayers by enriching the value and tax yield of the land around the liability.  Travel less than an hour down the road to Kitchener-Waterloo to witness how their recently completed LRT has enriched their local tax base along that transit corridor.

Environmental and fiscally sustainable cities commit to investments that will build legacy value, enhance revenue yields and create meaningful GHG savings.  On all three fronts, electric buses are no substitute for LRT.