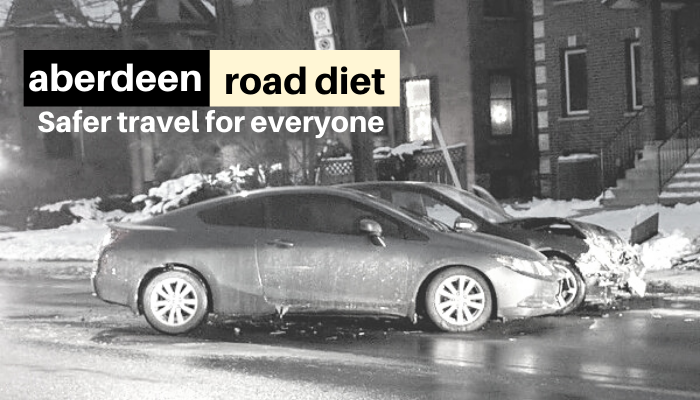 With the two-way conversion of Queen Street South underway, and widely-supported, long-delayed traffic calming coming to Aberdeen Avenue, a group calling itself “Keep Aberdeen Moving” has formed to campaign against these measures. The group has raised concerns about negative impacts from the traffic calming, a compromise plan that turns Aberdeen’s curb lanes into curbside parking to slow traffic and protect the sidewalks while providing more local parking.

I believe we all share the goal of a safer, more inclusive community for everyone and I welcome this group engaging on this important issue. Their fears are understandable and I appreciate the opportunity to respond to their concerns so we can make our policy choices based on the best evidence.

Aberdeen is a dangerous street. The City has determined that Aberdeen has 4.7 collisions per million vehicle-kilometres, far higher than the industry standard of 1.0 for identifying an area of concern. Not surprisingly, the City’s vehicle speed survey found extensive speeding along the street during peak AM and PM rush hours.

In 2018, some residents requested that Public Works rank Hamilton street segments based on a “network risk indicator”. The report ranked Aberdeen (between Queen and Dundurn) in 559th place. Traffic calming opponents have cited this to suggest Aberdeen is not really that dangerous. It’s important to put the ranking in context.

First, it is out of 2,740 street segments measured, meaning Aberdeen is in the top one-fifth of streets by this measure of collision risk. In addition, the formula used in the report is weighted extremely heavily toward deaths while severely discounting injuries. But I’ve spoken with residents who have suffered catastrophic injuries on Aberdeen and I am not ready to discount their life-changing experiences.

The network risk indicator data also fails to capture the pedestrian or cyclist experience.  It doesn’t capture the near misses.  The fear.  The unacceptable risks that accompany a daily commute to school, daycare, work or the library.   It fails to account for having to take the long way home to avoid unacceptable but correctable risk. Listen to the stories of any crossing guard for a daily account of life on Aberdeen.  Aberdeen is not safe for our children.  It is not safe for drivers.  It is not safe for anyone

Slowing car traffic will make Aberdeen safer. All of the evidence we have from decades of traffic safety research around the world points to one conclusion: when you slow vehicle traffic, the incidence of serious collisions goes down. Here in Hamilton, we already have great examples of streets that became much safer, more enjoyable and vibrant after we implemented traffic calming.

On Aberdeen today, there are four traffic lanes, two in each direction, with plenty of opportunity for speeding and dangerous passing. With the exception of the north side for a few blocks between Dundurn and Locke, those cars are racing just inches away from the sidewalk.

Converting the curb lanes to parallel parking prevents high-speed passing, while physically protecting the sidewalks from heavy, fast-moving motor vehicles. Together, these changes will make the street much safer for families walking to school, children going to the park, seniors visiting the library, congregants going to their place of worship, shoppers or diners heading to Locke Street - everyone who wants to feel safer walking in our community.

Aberdeen can handle the traffic with two lanes. Some have argued that two lanes of traffic cannot accommodate the traffic volume Aberdeen Avenue receives. However, Mohawk Rd/Rousseaux St is a two-lane road in Ancaster that accommodates higher car volumes and is considered a major arterial road. Approximately 24,000 motorists a day exit from Highway 403 and the Linc on to this Ancaster road - 4,000 more than Aberdeen Ave.

Aberdeen also carries less traffic than Beckett, since some car trips continue north on Queen and east on Herkimer. Even more trips will be diverted onto Queen once the two-way conversion is finished which will allow travel to King Street.  So, we know Aberdeen can handle the traffic on one lane in each direction, just like Beckett.

Ideally, the traffic calming on Aberdeen would include a centre turn lane, but the current plan is a compromise intended in part to deliver a quicker improvement while demonstrating (yet again) that traffic calming works.

‘Rat-running’ is a problem. The strongest argument from traffic calming opponents is fear of ‘rat-running’, or commuters short-cutting along residential side streets instead of the main arterial. Rat-running is already a challenge in Kirkendall, and I am committed to working with staff to monitor the effects of this change and responding as needed.

There are already rat-running restrictions on Queen, for example at Glenfern and Stanley, and more changes may be needed to further protect residents as we observe the progress of traffic calming on Aberdeen.

But the solution is certainly not to give up and do nothing. We all know the status quo is unacceptable, and we have proven tools to make our streets safer. Change can be scary, but we finally have a real opportunity to create a safer, more accessible and more inclusive community.