Aberdeen is not a safe street. In fact, it is almost 5 times as dangerous as the industry threshold for an ‘area of concern’. Changes were required and requested by residents over the years.

All of the changes, including the final phase about to be made, are designed to make the street safer for all who use it every day.

The input of residents, the expertise of our traffic engineers, Council approved program and policies, and the review of similar roads in Hamilton were part of the planning process.

I’m confident these changes will ensure the road is made safer for all residents, particularly for the hundreds of children who use Aberdeen every day to and from school.

Please review this update and Contact the Superintendent of Roadway Safety, David Ferguson ([email protected]) or contact me if you have questions or feedback you wish to share.

Aberdeen is not a safe street.   It is 4.7 times as dangerous as the industry threshold for an “area of concern”.   Parking will provide a buffer between pedestrians and live traffic.  The City’s Vision Zero Action Plan and Transportation Master Plan direct elected Council and staff to consider vulnerable road users first:  i)  pedestrians, ii) cyclists, iii) transit and iv) automobiles.  Children are classified as the most vulnerable pedestrians.

The design of a road directly affects how people drive on it.  Unlike other parts of Aberdeen, the section from Queen to Dundurn does not enjoy a grassy boulevard.  Instead, pedestrians are immediately adjacent to the roadway.  Parking will improve the pedestrian experience by creating a buffer of space and time between the sidewalk and active street traffic.

Vision Zero is a global movement transforming the way we use, interact and travel on our roads. It has a simple and straightforward goal: ZERO fatalities or serious injuries on roadways. Vision Zero aims for safer streets through improved education, enforcement, engineering, evaluation and engagement.  Vision Zero is about recognizing that traffic deaths and injuries are preventable.  In terms of the hierarchy of street users, children are ranked as the most vulnerable user and sit at the top of the priority list.

The City receives many requests for implementing speed cushions and traffic calming measures on different types of arterial roadways. However, it is not done. New policies (Complete Streets, Vision Zero, Transportation Master Plan) have been approved by Council with the goal of making city streets safer for all users.

2. What are the specific changes?

In June 2019 Hamilton City Council recommended that the following changes along Aberdeen to address ongoing risks to health and public safety:

Aberdeen will remain a 4-lane roadway.  There will be no bump-outs or physical barriers added to the street.  Aberdeen becomes a 2-lane roadway only if drivers park in the curb lanes.

The approved parking changes map illustrates the restrictions in terms of distance from corners, bus stops and intersections.  The section of Aberdeen west of Dundurn remains unchanged.

Only #3 above is outstanding.  Council directed staff to enable parking immediately following the conversion of Queen Street, from Aberdeen to Main Street. 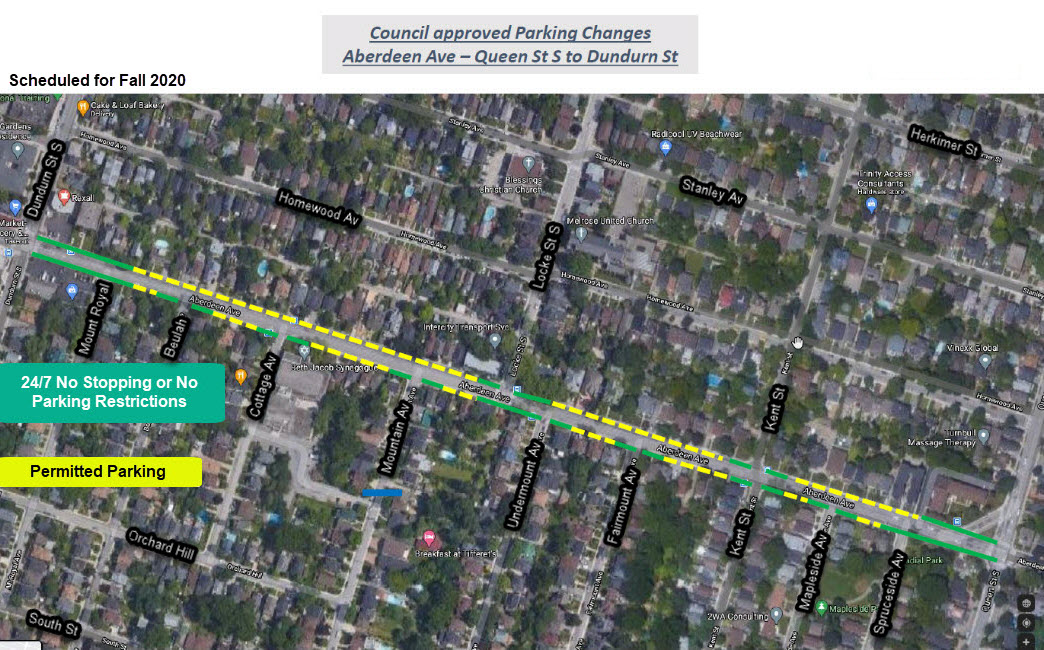 3. How were these changes identified?

In 2015 Kirkendall neighbours brought their safety concerns to Hamilton City Council.  In 2016, Hamilton City Council directed staff to conduct a full review of Aberdeen.  In 2017 Council directed staff to provide interim safety measures and to report back on the safety status of Aberdeen.  In 2019, the City’s transportation staff reported that the street was still unsafe and recommended the above four changes.  In June 2019, City council approved these recommendations.  The road diet was delayed until after the 2-way conversion of Queen, from Aberdeen to Main Street.

4. What will NOT be changing?

At the intersection of Locke and Aberdeen, the City’s signals team will balance out the timing and the right of ways for the various directions to ensure there is no negative impact on any one specific direction.  Changes will be implemented accordingly.

No changes will be made to Aberdeen west of Dundurn. (see map below) 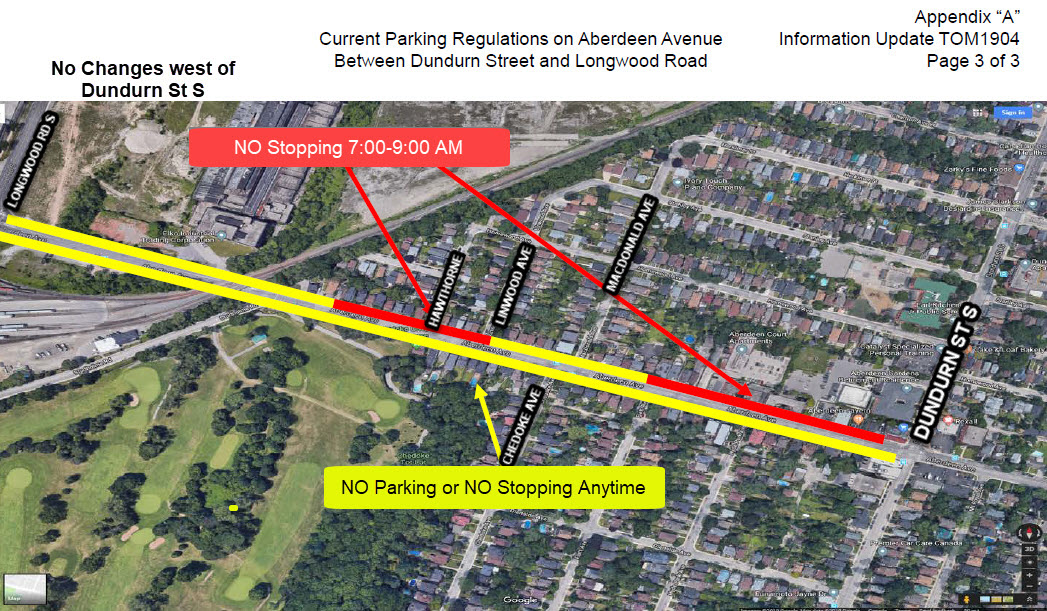 5. What potential impacts have been considered?

a) Traffic diversion onto side streets

Parking will have a minimal impact on travel time along Aberdeen, potentially adding 60 seconds or worse case, 120 seconds, at peak hours.  Using side streets will take longer.

Ward 1 has the second-highest number of speed humps across the entire City (48), and the Kirkendall neighbourhood hosts half (24) of this total.  Cutting through Kirkendall streets will take longer than travel along Aberdeen Avenue.  Drivers will encounter speed humps and stop signs.

Kirkendall suffers from cut-through traffic now.   Along with slowing the traffic along Aberdeen Avenue, the goal is to make Aberdeen less attractive to drivers.  The law of induced demand tells us that more lanes attract more drivers.

If diverted traffic occurs, the City will undertake a cut-through traffic study.  Staff will be placed throughout the neighbourhood to record license plate information and track where a driver enters and exit (origin-destination study).   Transportation staff will look at countermeasures to be implemented if needed.

b) Change in road capacity to handle the traffic volume

Aberdeen is a minor arterial.  There are examples of major arterials that carry more vehicles than Aberdeen and have two lanes.  Rousseaux Street in Ancaster, connecting to the 403 and The Linc, is a two-lane major arterial road that carries 4000 more passengers a day compared to Aberdeen. 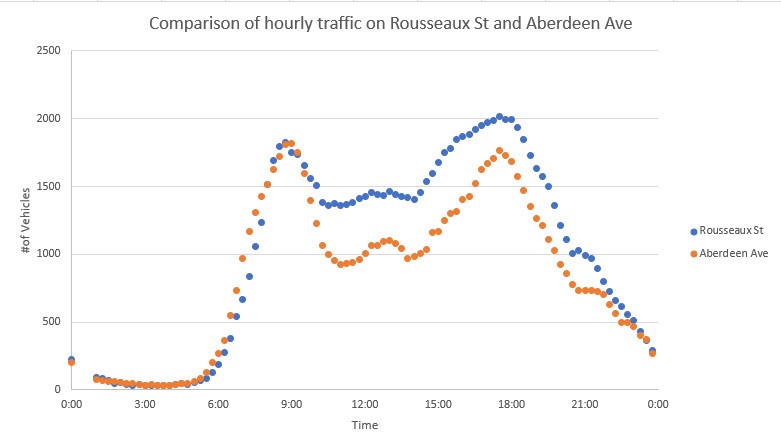 Aberdeen Avenue currently operates at a level of service “d” under the City’s transportation master plan.  The City’s signals system group undertook an evaluation using a computer program to determine the impact of shifting from 4 to 2 lanes.  Two lanes can accommodate the volume of traffic without falling below the acceptable level of service.

There will a limited impact on travel time.  At present, it takes 4 to 5 minutes to travel the length of Aberdeen.  Once parking is put in place, it could take 5 to 6 minutes.  If you know it may take you an additional 60 seconds to travel the length of Aberdeen, it is very unlikely that a driver will get off at a side street since this journey will be far longer than 60 seconds due to existing speed humps, stop signs and the additional streets that will have to be travelled to get to their destination.

d) Sightlines for turning onto Aberdeen

The attached map illustrates the restrictions in terms of distance from corners, bus stops and intersections to ensure sightlines are protected.

Aberdeen was not identified to host a cyclist facility in the City’s cycling master plan.  However, work is underway right now on a multi-modal study for Ward 1 which seeks to identify and provide for key connections that may not presently exist across ward 1 to facilitate a safer, more efficient and effective choice of movement for cyclists.

The map of the changes indicates that the City is only permitting parking in certain areas.  For bike routes, you want to provide a route that allows a cyclist to travel from A to B, uninterrupted.  Transit stops along Aberdeen and cyclists would impact a cyclist would have to enter general-purpose lanes at the intersection of Dundurn and Aberdeen.  We would have to completely reconfigure and reconstruct the street to enable a safe bike route.

Slower speeds reduce the amount of emissions from cars compared to speeding cars.  There is going to be either a similar number of vehicles travelling along Aberdeen or potentially fewer now that Queen Street has been converted to Main and in the future to King Street.  Slower speeds actually reduce the amount of emissions coming out of cars versus speeding cars.

g) Impact on those with physical challenges

Making the journey safer for pedestrians with the buffer of space and time will also make the trip safer for all users.  The report identified the unsafe feeling for pedestrians walking along the corridor because there is a sidewalk immediately adjacent to live traffic.  For a person with mobility issues, this would provide a better experience for them in terms of their access and travel along the corridor.

The City will deal with snow removal the same way it deals snow removal on 3000 km of roadways that allow for parking within the City.  If cars are parked on Aberdeen, City plows go around the cars and crews will return to clean the snow once the vehicle is gone.

i) Movement of EMS vehicles and detours

The City of Hamilton is focused on implementing a safe systems approach to road safety.  In Vision Zero, the safe systems approach is focused on safe roads, safe speeds, safe drivers and safe vehicles.  Enforcement is a tool.  Education is a tool.  The number one thing that we must focus on is how we design our roadways.  Safe roads are designed to reduce the risk of crashes occurring and the severity of injuries if crashes occur.  The design of a road directly affects how people drive on it.  Designing our roadways so people cannot speed is more effective than enforcement.

The HPS does provide speed enforcement services across the entire City.  A full-time presence on Aberdeen is not possible due to resources and demand for service elsewhere.

Automated speed enforcement (e.g. photo radar) is currently not permitted for use within an area with a reduced speed limit controlled by flashing lights.  The province is coming forward with changes to the Highway Traffic Act which could see some modifications concerning school zones and the removal of flashers. Still, until that takes place, the City is unable to implement automated speed enforcement within that area.

The City’s transportation services will be monitoring turning movement counts to identify any issues.  For example, some restrictions in the area of the intersection on the opposite side of the roadway could be implemented to enable vehicles could get around a left-turning vehicle if needed.

Drivers entering their parked cars on Aberdeen is a situation is no different than any other street that we would have parking on the road itself.  There are many streets where we have parking on the side of the road – we even have parking on Main and King – and that’s a similar operation as it would be here.  Additionally, from a road safety perspective, no pedestrian should be crossing any street from between parked cars at a non-controlled location.  Additionally, if people were to cross illegally, it is safer to cross two lanes of traffic, rather than four.

6. How do these changes enhance the neighbourhood?

7. How will the pilot be evaluated?

An evaluation of the change and a report will go to Council with an evaluation.  Council can decide whether the pilot will become permanent or not.

Council directed that staff report back to the City’s Public Works Committee on these four changes after they have been put in place.  Staff will review and evaluate the effectiveness of all of the changes together to determine whether they meet Vision Zero and the City’s Transportation Master Plan objectives.   Staff will follow the City’s policies and assess the impact on the level of service and safety and make a recommendation in terms of possible improvements or modifications necessary.

City staff generated several traffic studies before COVID-19, including traffic counts at various intersections along with mid-block speed and volume counts.  Staff also undertook speed and delay studies, measured from Fennell Avenue to Hwy 403.  Once the changes are implemented, these same measurements will be taken in the spring of 2021.  The City’s roadway safety group, along with the traffic signal systems group, will also be monitoring all locations.

8. How can I have input into the pilot evaluation?

Contact your Ward 1 Councillor (details below) or the City’s traffic safety office at 905-546-2489 (CITY) to provide observations, concerns, ideas or comments.

Full Review of Aberdeen Avenue from Queen Street to Longwood Avenue, respecting the Safety and Operational Characteristics of the Roadway (December 2, 2015)